Grant Kaestner, Account Manager at Advantage Preservation, recently received a rewarding phone call from one of our library partners in Maine. Representatives from the Fort Fairfield Public Library reached out to him to share their appreciation for our partnership approach and its positive impact on communities involved.

“We love having our digital archives available and free to anyone through Advantage Archives” said Fort Fairfield Public Library Director Jennifer Gaenzle. “We have received great feedback from our patrons and even from across the country of how grateful everyone is for this resource for genealogy and history research. Staff has also found it a great time saver when more in-depth research is needed, by allowing us to search more uncommon requests easily and quickly.”

In addition to the valuable feedback, Jennifer also relayed an illuminating firsthand account of their community history archive in action.

Stirling Fessenden was just a boy from Fort Fairfield in the early 1900s when he moved to Shanghai to practice law, ultimately becoming Lord Mayor of Shanghai, China. He was a very influential figure in the years leading up to World War II and he ran Asia’s largest city for 16 years until he passed away in Shanghai in 1944. 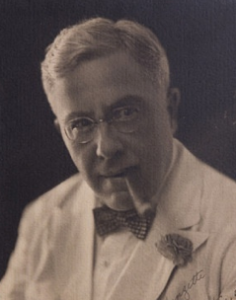 Stirling Fessenden was an American lawyer who practiced in Shanghai. He was the chairman of the Shanghai Municipal Council from 1923 to 1929 and then Secretary-General of the Council from 1929 to 1939.

With the help of the Advantage digital archives, the library was able to provide an abundance of information to Mr. Clark about Stirling’s early life and family in Fort Fairfield as reference for his book. By use of the archive, they were even able to pinpoint the location of his childhood home on High Street, as well as the burial site of his mother and father – Nicholas and Laura Fessenden.

In addition to his accomplishments as an author, Douglas Clark has practiced intellectual property law in China for over a quarter of a century. He found the digital archive at Fort Fairfield Public Library to be a valuable resource for his upcoming book.

Grant wanted to share this update with the Advantage team, because, as he said, “it is important to see that what we do has a positive impact on communities all around the world.” Grant’s story is not unique. Our account managers at Advantage hear these stories often.

These narratives serve to illustrate the far-reaching effect of historical preservation and access to community history beyond the library. Advantage prioritizes unlimited access to our archives and its collaboration with institutions that value and promote the dissemination of history. There are many stories like the one highlighted by the Fort Fairfield Public Library. We encourage you to share some of your own with us.

Stirling Fessenden was born in Fort Fairfield in 1875, the son of Nicholas Fessenden, who served as the Secretary of State for Maine and long term Fort Fairfield public servant.
Stirling, after graduating from Bodwoin College, worked briefly in New York City before heading to Shanghai at the age of 28. There, he was admitted before the United States Court for China, a special court for trials against Americans. He built a large and successful legal practice appearing not only in the US Court, but British, Chinese and other consular courts in Shanghai and the rest of China.

Fessenden became the leader of the American legal community in Shanghai and travelled to Washington DC on a number of occasions to defend the courts and its judges before Congress and US presidents. In 1923, Fessenden was elected Chairman of the Shanghai Municipal Council serving in that position until 1929 when he was appointed to the newly-created position of Secretary-General. Over 16 year he effectively served as the “Lord Mayor of Shanghai”. In this role he had to handle massive rioting in 1925 when Shanghai foreign police shot and killed Chinese protestors, Japanese threats to Shanghai in 1932 and 1937 when Japan launched attacks in and around Shanghai as well as many other delicate diplomatic and commercial negotiations to keep Shanghai as safe and independent as possible.

Fessenden retired due to ill-health in 1939 but remained in Shanghai where he was interned at home by the Japanese in 1941 – cared for by his long-term Russian Mistress, Olga – until his death in 1944.