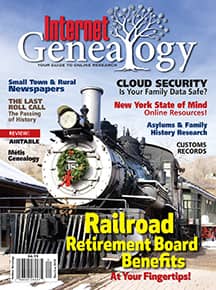 Researching your rural ancestors in newspaper collections is becoming much easier and more convenient. Thanks to the work of Advantage Preservation, a division of Advantage Archives based in Cedar Rapids, Iowa, more than 55 million historical newspaper pages in 39 states are now available online through their digitization projects.

Exploring the lives of your rural ancestors presents unique challenges, especially when searching for them in newspaper collections. Most digitization efforts tend to focus on larger newspapers, with little available online for small-town and rural newspapers. However, Advantage Preservation works with publishers, libraries, and historical societies to make local history more available. Through its Community History Archives, www.advantagearchives.com/new-cha-directory, you can now access many of these rural newspaper collections online from the comfort of your home.

Large, daily newspapers tend to cover only prominent figures. However, in rural areas, the opposite is true — the smaller the community, the greater the details provided about ordinary folks. Small-town and rural newspapers also focus more on community events and will likely provide a more detailed historical background of your ancestors than larger newspapers. They can provide a more intimate view of your ancestors’ lives beyond the typical birth, marriage, and death notices you might expect to find.

You can also discover the major and often life-changing events they lived through to add historical context to your family history. For example, not only will you find headlines announcing World War II, but you can read about local efforts to support the war, such as children collecting milkweed pods to use as life jacket filler, families planting victory gardens, or communities holding donation drives. You might also find information about the rationing of food and other supplies which your ancestors endured during the war. In addition, the local newspaper would likely include information about the draft and those in the community who served in the war (some even printed soldiers’ letters home.

Perhaps your ancestors were farmers? If so, you might want to learn about local weather events which affected them, such as drought, flooding, and blizzards. Often small weekly rural newspapers would also report on the local farmers’ planting and harvesting progress and tell you whether it would be a good year or a bad one. Did your ancestors struggle to keep the farm throughout the Great Depression? You might find stories about foreclosures and bank failures. Did one of your ancestors run a local business? You may find advertisements in the newspaper. Were others involved in sports, band, or some other school activity? The local newspaper also covered school events.

How much of a difference can access to the local newspapers actually make, you may wonder. All of my ancestors immigrated in the late nineteenth or early twentieth century. The first immigrants from both sides came to America in the 1870s, and all of them eventually came to Nebraska and were among the early pioneers to settle in Antelope, Knox, Pierce, Stanton, and Wayne counties. When I began my family history research, none of the newspapers in those counties were available online so I had to either research the newspaper archives in person or hire a researcher. Now, through the digitization efforts of Advantage Preservation, nearly all of them have been digitized and can be searched online for free.

While I did find a large number of birth, marriage, and death notices, I also found articles about the amusement park opened by my great-grandparents in 1922, where my paternal grandparents had met, and notices when my grandparents moved to town and my grandfather opened his farm supply store. There were advertisements for Lawrence Welk dances in the area, which my maternal grandparents frequently attended. I read about the hay mowing bee that neighbors organized for my grandfather when he was injured in a farm accident and the dust storms which hit Northeast Nebraska in 1935.

Additionally, articles on family reunions and wedding anniversaries provided information not found elsewhere, such as when a family first settled in the area, built their first house, or moved to a new farm. The society columns detailed family visits and illnesses or when neighbors helped with harvesting. I even found mention of my grandparents being shot at by another driver in 1937 while on the way to visit family several hours away (a story which no living relatives remembered) and when my father began school in the fall of 1940.

Before you begin searching, take some time to become familiar with Advantage Preservation’s Community History Archives through its helpful resources, www.advantagearchives.com/preservation/preservation-resources. Not only will you find detailed information on the tools available to you, but useful tips and tutorials to help you browse and search more effectively. For updates on Advantage Preservation’s newspaper collections online, check their blog, and follow them on Twitter, Facebook, or LinkedIn, www.advantagearchives.com/resources/follow-us.

Article featured in www.internet-genealogy.com ~December/January 2019. Carol Richey is a freelance writer and avid genealogist living in Fort Wayne, Indiana, with her husband and five children.