There is a lot to learn from old newspapers if you know what you are looking for. Before the advent of the Internet, it was newspapers that were relied on most for information. Now, many old newspapers have been digitized and made available online as a resource for historians, genealogists and writers among others.

With the use of newspapers as a research tool; information such as birth and marriage announcements, obituaries, advertisements, cartoons and news coverage all provide a glimpse of the past. When conducting research-using newspapers in a database such as our Community History Archives, it is important to view items through a lens of time and place. The context surrounding a story in an old newspaper can often tell us more than the story itself. This is also important to consider when conducting a search, as newspapers can be written in language that has changed over time or written to connect with a very different audience. Items to consider when using newspapers for research include:

Language – Language and the use of common terms change over time as well as place or region. An example of this is “The Great War” used at the time of World War I and used interchangeably with “the war to end all wars” until the start of a second World War. An example of language by region in the United States is the word most commonly used for a carbonated beverage – Pop or Soda. We see differences in the use of pop or soda by region and in the south they simply refer to it as Coke.

Other important items to consider are the audience, politics and how coverage of the event developed over time. The intended audience of any article as well as the political and social agendas of the time will all contribute to the narrative to a certain degree as they do today.

A primary source in the news is often the very first published record and can provide more than a detailed account of events. A primary source can also provide valuable information on political and social agendas and how events were viewed at the time compared to how we view them now.

In a previous article, we examined how the sinking of the Titanic was covered in our local newspaper. With our knowledge of the topic today, looking back at the first accounts of the event is a fascinating case study. An initial report of “No Lives Lost” is an unfortunate reminder of how stories can develop over time. The coverage of the Titanic at the time provides an abundance of information on the tragedy, but also a lesson on using newspapers as a research tool to find facts. 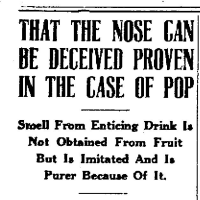 “Prohibition has made soft drinks so interesting, a scientific study upon the subject will not lie out of place.” The Cedar Rapids Gazette, Tuesday August 10, 1920.