The Coe College archive contains a wide variety of content, including yearbooks from 1903-2007 and newspapers from 1899-2013.

Coe College was founded by Presbyterian minister Williston Jones in 1851. The college is located in Cedar Rapids, IA, and has an undergraduate enrollment of over 1,300 students.

“The Coe College archive is a great tool for not only current and previous students but for the Cedar Rapids community as a whole.”

When the Rev. Williston Jones founded the college in 1851, he called it The School for the Prophets. Cedar Rapids’ first resident minister opened the parlor of his home to a group of young men with the goal of educating them for the ministry to serve churches in the Midwest. Two years later, while Jones was canvassing churches in the East for money to send three of his students to Eastern seminaries, a Catskills farmer named Daniel Coe stepped forward with a pledge of $1,500 and urged Jones to start his own college in the frontier town of Cedar Rapids.

Legend has it that the $1,500 raised by Coe was brought sewed into the petticoat of a lady visitor traveling west by stagecoach from New York to Iowa. Coe gave this generous gift with the stipulation that the proposed institute should be “made available for the education of females as well as males.” Accordingly, Coe was coeducational from its founding.

With Jones’ blessing, the Cedar Rapids Collegiate Institute was incorporated in 1853 by a group of Cedar Rapids leaders, chaired by Judge George Greene. They used Daniel Coe’s donation to purchase two downtown lots for the school and 80 acres of farmland on what was then the edge of town. The farm would eventually evolve into the campus of today.

In 1868, the trustees renamed the school Parsons Seminary in a failed attempt to secure the Lewis Parsons estate. After severe financial difficulties, the institution was re-established in 1875 as the Coe Collegiate Institute in honor of its original benefactor.

T.M Sinclair, the founder of the Sinclair Meat Packing Company, played the key financial role in the final step toward the firm establishment of Coe College. Sinclair liquidated all of the debt from both Parsons Seminary and the Cedar Rapids Collegiate Institute. This made it practical for the property of the Coe Collegiate Institute – including the original land paid for by Daniel Coe – to be transferred to Coe College, with the major responsibility for the institution assumed by the Iowa Presbyterian Synod. 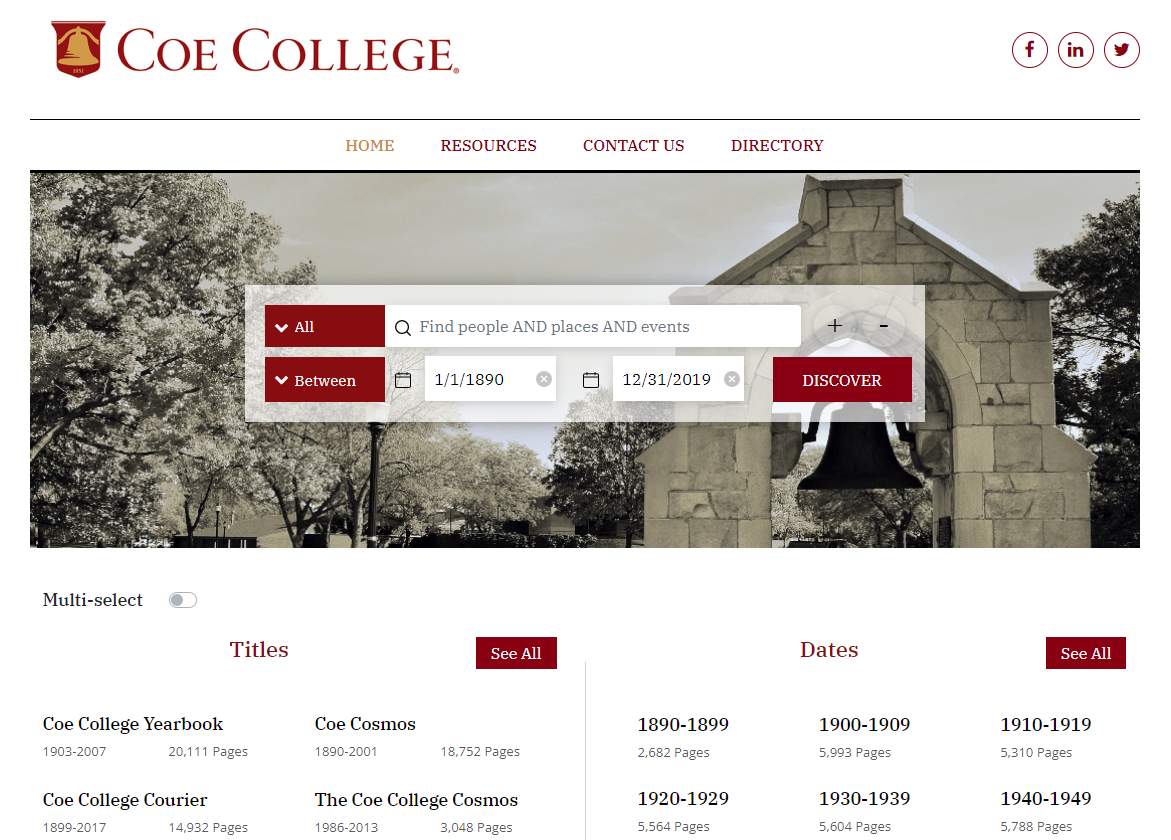 Coe College has operated continuously since it was incorporated under that name on Feb. 2, 1881. From its very beginning, the college has been committed to intellectual excellence and has continued in this tradition ever since.

In 1919, Western Leander-Clark College merged with Coe College, bringing alumni, faculty, and students, as well as a $200,000 endowment. Western College was originally located in a small community between Ely and Shueyville. The school was founded in 1857, and it was the first college west of the Mississippi River built by the United Brethren in Christ, hence the name Western College. The institution was also co-educational from the start, just like Coe College.

The land around Western College was bought by a group of immigrants who upheld a different religion and set of values than the school’s founders, creating a lack of community support that caused the college to encounter financial difficulties. In 1881, the college moved to Toledo, IA, where the residents pledged $20,000 in support. However, financial difficulties continued. In 1906, the college was renamed after a local benefactor, Leander Clark. Despite this, the financial burden became too much, and the college went bankrupt. (If you would like to learn more about Western College, history is available for check-out, “Western, Leander-Clark College, 1856-1911,” by Henry W. Ward, at the Stewart Memorial Library on Coe Campus. You may also visit the archives to view Western Leander Clark College’s collection containing source material from the college’s administration.)

In 1907, Coe earned accreditation from the North Central Association of Colleges and Universities. Over the decades, Coe’s reputation as a superior liberal arts college has continued to grow. One recognition of this occurred in 1949 when Coe was granted a Phi Beta Kappa chapter, a distinction reserved for fewer than five percent of all American colleges and universities.

Advantage believes strongly in building lasting partnerships, which is why we enter into them with the intent of shouldering our fair share. We take the burden off of the community for the ongoing costs associated with storage, hosting, development, and maintenance of their Community History Archive. We are proud to participate actively in the community’s efforts to make their collective history more accessible.

If you are outside of Cedar Rapids and would like to see YOUR local history online, please contact your local library, newspaper publisher, genealogical society, historical society, or educational institution, and encourage them to learn more about creating a Community History Archive like the one the Coe College has created for theirs. Ask them to e-mail us at info@AdvantageArchives.com, or have them contact us at (855) 303-2727.