The Newburyport Public Library offers the community a way to connect to its past with an archive containing nearly 200 years of the community’s local history from a variety of titles.

A few years back, one of the Libraries we visited was the beautiful Newburyport Public Library, which first opened its doors 167 years ago, making it one of the earliest public libraries in Massachusetts. In 1870, 15 years after the library was founded, it established one of the first public newspaper reading rooms in the United States.

“In 1865, the library moved into the Tracy Mansion, where the library remains today. This renovated and expanded historic 18th century Federalist building was originally built in 1777”

To provide more space for the expanding library, eight local subscribers purchased the Tracy Mansion on State Street. They conveyed the property to the city to be used perpetually as a public library. The Library relocated to the Tracy Mansion in 1865 and opened to the public there on January 1, 1866. This historic brick building was built in 1771 for a wealthy local merchant and ship owner. Nathaniel Tracy was an ardent patriot and a successful privateer during the Revolutionary War. George Washington, Thomas Jefferson, John Adams, Aaron Burr, and General Lafayette all were entertained in the Tracy Mansion. Tracy lost his fortune after the war and was forced to sell his assets, including his home. Before it transitioned to a public library, the Tracy Mansion was used as a hotel, a bowling saloon, and a dentist’s office. 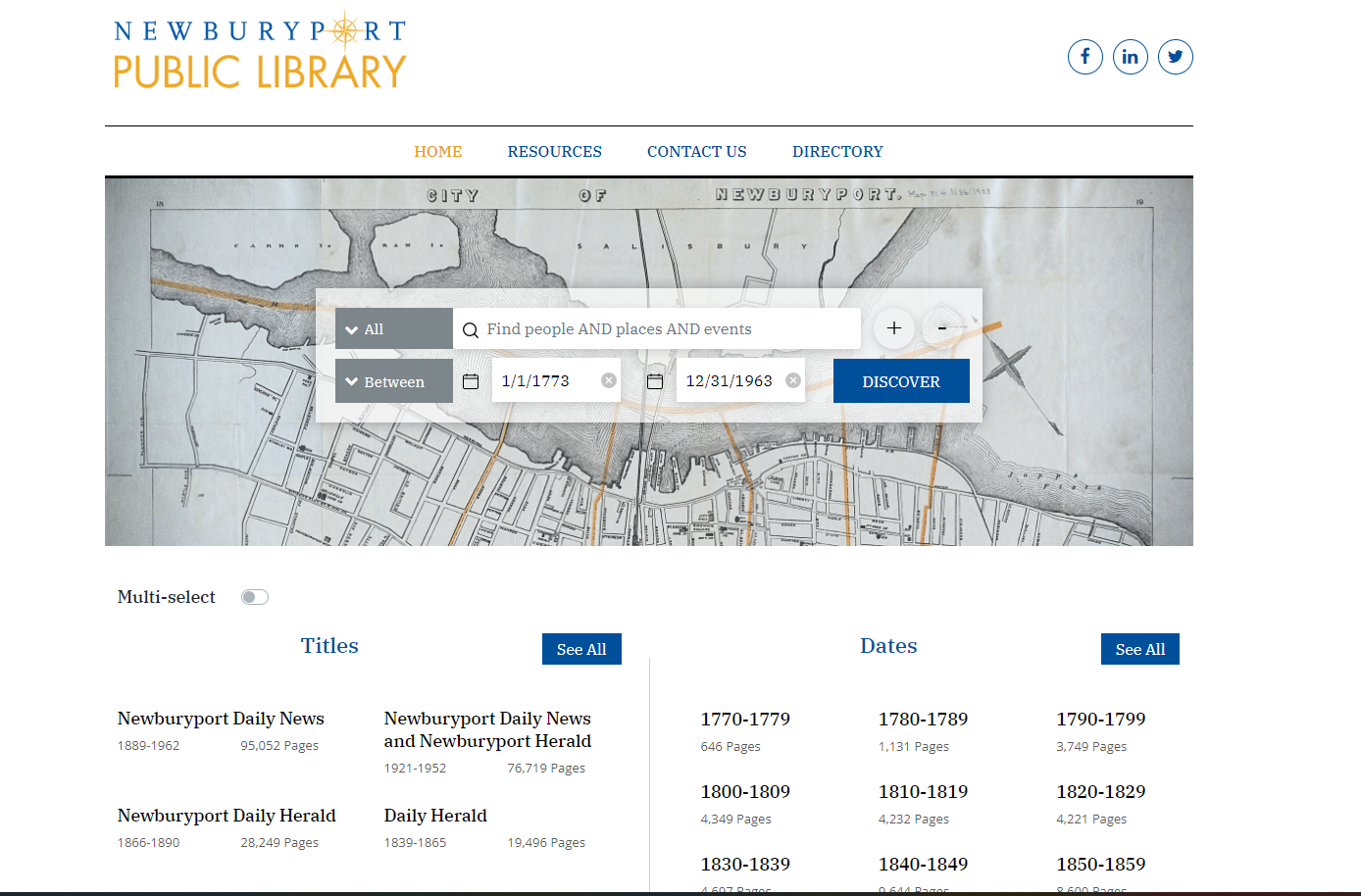 In 1870, one of the first public newspaper reading rooms in the United States was established by the Newburyport Public Library. A two-story addition, the Simpson Annex, was constructed in 1881, and the Library’s exterior and portions of the interior were renovated in the Victorian style during the 1880s.
In 1900, the stacks were opened, allowing patrons to browse and retrieve books independently. The 1920s brought the creation of a separate Reference Department and a Children’s Room. The Friends of the Newburyport Public Library organization was founded in 1939 and is an important support to the Library today. The 1968 membership in the state’s fledgling regional library system was a precursor to the Library’s current membership in the Massachusetts Library System (MLS). Public computers were introduced in 1985, and the Library became an active member of the Merrimack Valley Library Consortium.

The Newburyport Archive has some rich history within. I find it to be such a powerful research tool, and use this archive frequently. The history in this portion of the country is incredible, and Newburyport has such an extensive date range of content it is incredible what you may find.

By the early 1990’s the need for a larger and improved facility became evident. After a successful community effort, the Library moved forward with a $6.8m building project to renovate and expand the Tracy Mansion. In October 1999, the Library moved to a temporary location, the Anvil Rock Farm in the industrial park, providing library services during construction. With great anticipation, the newly renovated and expanded facility at 94 State Street reopened on May 6, 2001. The Newburyport Public Library continues its long and historical tradition of providing a wide range of library services to the community.

Today, Newbury Port has a fantastic archive with history from 1770 to the 1960s. This archive has a variety of titles in it, including the Essex Journal and Merrimack Packet, Newburyport Daily News, Newburyport Herald, and many other titles. We are very thankful for our extensive relationship with this library. Preserving the past from such a historical area of the country is always something that we are excited to do.