The Pawtucket Public Library provides access to the rich history of Pawtucket and the surrounding areas thanks to their Community History Archive, currently featuring The Pawtucket Times newspaper from 1886-1947!

We live in a time where people have come to expect that the vast majority of information that they are seeking can be found quickly through online searches. However extremely specific questions like those we see with local history questions don’t lend themselves to successful “Google” searches. By providing access to this material online we’re contributing to our mission to provide material to our patrons in the manner and fashion that they now perform their research

The Pawtucket Public Library opened on October 15th 1902 and is believed to be the first, or amongst the first libraries in the country to adopt the now nearly universal policy of open stacks that allowed patrons to search through the collection themselves instead of requesting a book that was then retrieved by library staff. Additionally, the Pawtucket Library was the first in the nation to allow children under 13 access to the library and to be open Sundays so that working citizens could make use of the library.

In 1898, Pawtucket’s first Mayor, Frederic Clark Sayles offered to give a plot of land on Summer Street for the construction of a free public library. He traveled to Europe, looking for architectural inspiration from Europe’s most majestic libraries. The corner stone was laid on November 18, 1899. On October 15, 1902 the library that he built for the free use of the people of Pawtucket was opened and formally dedicated in memory of his late wife, Deborah Cook Sayles. It was one of the first libraries in the country to allow users open access to the library book stacks and one of the first to be open on Sundays. Minereva Sanders, the Library’s first librarian, is also credited with making Pawtucket one of the first libraries to allow children under the age of fourteen into the public library.

Today, the Pawtucket Public Library is a complex of two historical buildings, the Deborah Cook Sayles Public Library and the Gerald S. Burns Building. Both library buildings are listed on the National Register of Historical Places.

The mission of the Pawtucket Public Library is to enhance the quality of life for all citizens of Pawtucket by offering services which are indispensable to all and which provide information and opportunities for education, personal enrichment, and recreation. In doing so, the library strives to respond to the needs and desires of each individual and to treat everyone with respect and dignity. The library embraces this mission, and it is evident in their commitment to providing easy access to Pawtucket’s rich history.

Pawtucket is most well-known for being the birth place of the American Industrial Revolution when Samuel Slater opened the Slater Mill as the first water powered factory in the country. Pawtucket was once two separate villages both known as Pawtucket. One on the west side of the Blackstone River in Rhode Island and the other on the east side of the river in Massachusetts before a land swap unified it into one community in Rhode Island.

Digitization has been an ongoing goal for the library for well over a decade. In the last 3+ years significant progress has been made including getting the library’s yearbook collection digitized, focusing on in-house scanning of their photograph collection, and in the last 18 months partnering with Advantage to digitize the microfilmed newspapers and make them available online.

According to Tim, the decision to digitize from two equally important positions.

“First was that we wanted to preserve the lifespan of some of our local history material such as yearbooks & photographs that couldn’t be replaced if they were lost or damaged. Second we noticed that we were receiving more and more local history questions from outside the local area & from local residents that just couldn’t make it into the library during the hours that the local history room could be staffed.”

The local history collection at the library has a small endowment that pays out a yearly interest allotment, which they used last year to start the microfilm digitization project. Once it was up and running, Tim was able to show it to local and state level grant funders to expand over the past year to 18 months, including a larger grant from the State Office of Library and Information Services that allowed us to add 40 years of microfilmed newspapers.

Tim recalls how the partnership with Advantage Archives came to be:

“About 6 or 7 years ago Grant (Kaestner) visited our library consortium (Ocean State Libraries) to discuss some of the digitization services Advantage offered, fast forward to last year when we finally had room in the local history budget to think about digitizing our microfilmed newspapers & I reached back out to Grant and found that Advantage was still the best choice for what we were looking to provide to our patrons.”

Tim feels that at this point the archive is primarily being used a genealogical research tool, but the library has plans to reach out to the local high schools in the upcoming months so that hopefully they can begin to integrate the service into some of their history and research classes.

We asked Tim if any of the library’s patrons had shared any interesting stories about what they had discovered in the archive. He told us about a lady from the Netherlands who had asked the library about several serviceman that died during World War II that she believed were from Pawtucket.

““She is involved in an organization that ‘adopts’ and cares for gravesites of American serviceman (and other foreign military services) that were buried overseas and therefore have no local family to care for the gravesite. One of the names she provided I couldn’t find any mention of in either the Pawtucket or State material I had of individuals that died in service during WWII. “ 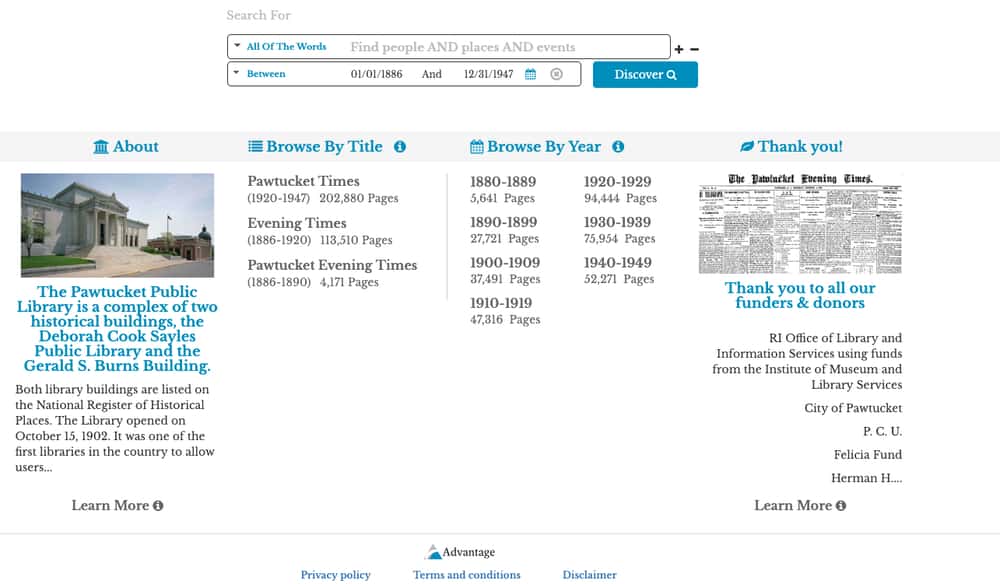 Discover the history of Pawtucket in newspapers from 1886-1947

However, Tim was able to help after the titles were made available in a highly searchable format. Utilizing the Community History Archive platform, he was pleased share with the lady what he had discovered:

“Once digitized newspapers from WWII time period went live I was able to do the search and discovered that the person she asked about was actually born in England and his family had moved to Central Falls, RI (a neighboring city to Pawtucket) right around the time he would have been entering junior high. When WWII broke out he wanted to follow in his father & uncle’s footsteps who had both served with the British Forces during World War I, so he went up to Canada and joined the Canadian Black Watch Regiment before being stationed in Britain where he became reacquainted with and married a childhood friend from before his family moved to America. Unfortunately, he died in battle in France ten months later. He didn’t appear in any of the casualty lists I had because he was serving in a Canadian unit.”

The library plans to continue to grow their archive and has another 60 years of the Pawtucket Times they would still like to digitize. In addition to the Times, Tim tells us there are several decades of the Pawtucket Gazette & Chronicle, a 2nd local newspaper from the late 1800s to early 1900s that they hope to add to the archive.

“After that my ‘wish list’ would be the city directories and some bound volumes of 2 other local newspapers that have never been microfilmed.”

Tim offers this advice to any libraries that may be considering a similar project:

“No matter how daunting of a task it seems just get started and you’ll find that it will slowly build support and continue to grow. Also don’t take it personally when you get the inevitable “what about 1948” when you’ve only gotten to 1947 or “I don’t see any pictures of [street starting with L]” when you’re still scanning the streets starting with D.”

Our Community History Archive is a valuable resource for our community because looking back at our history often helps us see where we want to be in the future.

The Pawtucket Public Library believes that to know your future you need to know your past and recognizes that the history recorded in the pages of the Pawtucket newspapers and other printed materials are invaluable. These pages, when stitched together, tell the story of the people, places, and events that shaped Pawtucket, the county of Providence, and Rhode Island.

The Community History Archive offers the community a “portal to the past”, allowing those primary source documents to give an accounting of history as told by the individuals that witnessed it. At Advantage, we have embraced the idea that preserving history is a shared responsibility. We partner with local community publishers, libraries, and other like-minded individuals to make local content more accessible, now and in the future.

We believe strongly in building long lasting partnerships, which is why we enter into them with the intent of shouldering our fair share and taking the burden off of the community for the ongoing costs associated with storage, hosting, development, and maintenance of the Community’s History Archive. We are an active participant in the community’s efforts to make their collective history more accessible.

Advantage partners with communities just like Pawtucket across the United States. We work together to archive & provide practical digital access to local historical content in print, that would otherwise be lost to the erosion of time. If you would like to see more local history online, please contact your local library, newspaper publisher, genealogical society, historical society, or educational institution, and encourage them to learn more about creating a Community History Archive or have them contact us at (855) 303-2727.

In May of 1921, a young Black shoeshiner named “Diamond” Dick Rowland was involved in an “incident” involving Sarah Page, a 17-year-old white elevator operator at the Drexel Building in Tulsa, Oklahoma. Rowland had gone to the Drexel to use the top-floor ‘colored’ restroom, which his employer had arranged for use by his Black employees. […]